To share your memory on the wall of Barry Rosenbaum, sign in using one of the following options:

He was predeceased by his wife Lil; parents: Isadore and Pauline, and sister Florence. Barry will be lovingly remembered by... Read More
Barry Rosenbaum
1934 - 2020

Barry was born in Calgary, Alberta. His family moved around western Canada for several years before settling in Moose Jaw, Saskatchewan. Here Barry and his father built and owned several rental houses, a lumberyard and the King’s Hotel. During this time, Barry also attended the University of Saskatchewan where he obtained a Bachelor of Pharmacy degree.

In the early 1960’s Barry and his family moved to Estevan, where he accepted a position as pharmacist and manager of the Pharmacy Department at the Estevan Co-op. In 1970 Barry invested in and soon became sole proprietor of Estevan Bowl. Although Barry believed running a bowling center would be a fun family sideline business, Estevan Bowl is now in its fifty first year of consecutive operation and third generation of family ownership. Barry still went in to work six mornings a week right up until the time of his passing.

Barry will be greatly missed by his family, friends and staff.

Receive notifications about information and event scheduling for Barry

We encourage you to share your most beloved memories of Barry here, so that the family and other loved ones can always see it. You can upload cherished photographs, or share your favorite stories, and can even comment on those shared by others.

Posted Nov 11, 2020 at 10:47pm
Wilf, Dave and families. My most sincere sympathy to you on the loss of your Dad, Barry. I have many memories of him over the years at Estevan Bowl. May your memories help to comfort you during this difficult time. Sincerely Marg Stewart (Plante)
Comment Share
Share via:
RF 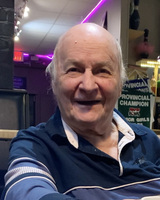